4 Things You Should Not Do at a Sobriety Checkpoint 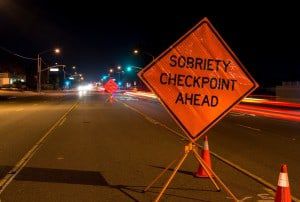 There’s a roadblock ahead. A barrier has been set up, with police cars parked close by. A line of cars snakes up to the barrier.

You’ve heard of DUI checkpoints, but you’ve never been stopped at one. What do you do?

Some people are frightened of sobriety checkpoints, even if they haven’t had a drop to drink. Others object to them as an invasion of privacy. But whatever your reaction, checkpoints are used in many states, including North Carolina, as a means of finding impaired drivers. So it helps to know how to deal with them. Here are four things you should not do when you see the lights and signs ahead:

The list of things to do at a sobriety checkpoint is much shorter: stop, answer questions, and if required, take the test. In no time at all you’ll be on your way, because, like smart drivers everywhere, you never drink and drive.

Previous Post: « DWI Arrests in Raleigh Up 50 Percent – And DWI Fatalities Drop.
Next Post: DWI vs DUI vs OWI vs DWAI –
What’s the difference? »