It’s the ultimate penny-wise, pound foolish decision: drive home to avoid paying a cab fare after a night of drinking. 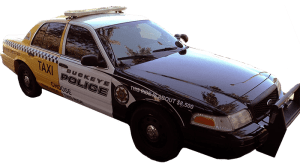 The Buckeye Arizona police decided to advertise this message to the city’s drivers by recycling an old police cruiser. The car is now half-taxi, half police car, and the message painted on it asks drivers to choose: the taxi ride home will cost you $50, the police car about $8,500.

In Arizona as elsewhere, the costs of a DUI arrest and conviction mount up fast.

These are the immediate, calculable costs. If you lose your job, the financial effect can be overwhelming.

Everyone likes a bargain, but driving drunk is no way to save money. Whether or not you are in Buckeye, Arizona, and whether or not you’ve seen the cruiser parked in various places around the city, you should have gotten the message by now: designate a driver, or take a taxi. You’ll be saving a lot more than just money.

Previous Post:NC Senate Says Mopeds Must Be Insured. But Is That the Whole Picture?
Next Post:Flagstaff DUI Crashes Up Last Year: Shortage of Patrol Officers to Blame