Will Kombucha Give You an Alternative, Probiotic DUI? 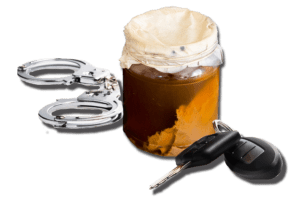 Kombucha has had two bursts of fame in recent days.  First, for becoming a popular social drink (and thus big business) in the U.S. after about 1900 years as an obscure Japanese health tonic. Second, for the revelation that drinking it can cause one to register a fail on a breathalyzer, alcohol monitor or ignition interlock.

The second flurry of publicity stems from the DUI arrest of Minnesota Vikings wide receiver Michael Floyd, whose blood alcohol concentration (BAC) was recorded at .044 by his alcohol monitoring device. Floyd claimed that he was drinking kombucha and did not realize that it contained alcohol.

Kombucha is a fermented tea drink; the fermentation process produces alcohol. Some brands have very little of it, but others have about half the kick of beer, so much that stores are cautious about selling the stuff to minors.

Not everyone buys Floyd’s explanation, and in truth it does sound as if Floyd was really chugging down the kombucha in order to reach that high a BAC. But most of us do not have the NFL and the sports press breathing down our necks – we just want to know if having a bottle of kombucha in the cup holder can land us in jail.

The truth is, even if kombucha alcohol can’t land you in jail, it could easily get you as far as the police station. If it’s fermenting, just drinking it could turn your mouth into a mini-brewery. So, for that matter, could fruit juice or even bread, which contains yeast. You could easily take a swig of kombucha and send a breathalyzer off the charts. Once a blood test was done you’d be exonerated, but no one would want to let it get that far.

This video demonstrates how kombucha alcohol in the mouth can cause a deceptively high BAC rating. Moreover, if you brew your kombucha at home, it will be unpasteurized, so the fermentation can continue and raise the alcohol content.

It goes without saying that if you have an ignition interlock installed in your vehicle, you should avoid kombucha when driving, and rinse out your mouth well if you’ve been drinking it that day. Ignition interlocks are designed to react to alcohol, so they’ll register the contents of your mouth as well as your system – it all exits through the breath.

Whether kombucha benefits the health is a question for medical experts. It’s proven beyond doubt, though, that drinking it can be bad for your breathalyzer results. So be warned.

Previous Post:Another NC Drunk Driver Causes Blackout. Will They Ever See the Light?
Next Post:Ignition Interlocks for All North Carolina DWI Offenders – Is It Time?