Could a Brandy Peppercorn Steak Flambé Lead to a DUI? 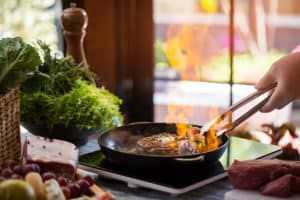 You’re driving back from a restaurant after a sumptuous meal. A police officer pulls you over – maybe you forgot to signal, or maybe it’s the proverbial broken taillight. Just then you remember that, while you didn’t drink, you had a dish smothered in wine sauce. Do you need to fear the breathalyzer?

The answer might surprise you. While it’s pretty much impossible to get drunk on food cooked with standard recipes that use alcohol as a binder or seasoning, trace amounts could remain in your mouth afterwards. Since you generally don’t brush your teeth before driving home from a restaurant, the alcohol on your breath might register on a breathalyzer. If you were later given a blood test to confirm whether or not you were intoxicated, you would be clean. But that’s still a messy outcome.

How Much Alcohol Is In Your Meal?

We’re told that alcohol “burns off” during cooking, but that’s not true. Much of the alcohol in food, whether used to deglaze a pan, add tang to a sauce, or flavor to a cake – is retained. The question is whether it’s enough to raise your blood alcohol concentration level. The answer is that it rarely is enough.

The USDA and two universities did a study on alcohol retention in cooking. A summary can be found at New York’s Office of Alcoholism and Substance Abuse Services site. The upshot: the most common cooking methods that employ alcohol leave some of it in the final dish. Sometimes that can be half or more of the original amount.

But remember that the amount needs to be divided by serving size. So if a cup of beer is added to a stew, and 45 percent of the alcohol remains after a half hour of simmering, that’s perhaps half an ounce of alcohol divided by how many servings of stew the pot contains. Not enough to make you weave on the highway.

Foods to Watch Out For

There are a few exceptions. While penne in vodka tomato sauce won’t push the breathalyzer needle – at least not if you rinse out your mouth before blowing – some foods are actually designed to have a kick. Specialty food companies make booze-infused canapés and treats. And there are a number of rum- and bourbon-soaked desserts that could have an effect, particularly on people who are easily intoxicated.

Another caveat: there are people who need to avoid alcohol completely, due to an allergy, alcoholism, or because they are taking Antabuse, a drug which reacts with alcohol. The amount of alcohol in food might be too much for them.

If you have an ignition interlock in your vehicle, you’ve received training on how to avoid problems with trace amounts of food setting off the device and causing a false positive. A simple mouth rinse with water is all it takes to blow a “go” and get back on the road.

While the old assurance that alcohol “burns off in cooking” is wrong, most people don’t have to worry. It’s the alcohol in the glass beside the dish that needs to be controlled. When people are hauled before a judge for DUI, chances are it is bad judgement, not the marinara sauce, that is to blame.

Previous Post:Kind Citizen Stops to Help at DWI Crash – Has Car Stolen. Sigh.
Next Post:I’ve got an ignition interlock and a big date. Can I use mouthwash?