Arizona DUI Arrests Are Seriously Down.

Some good news for the Grand Canyon State: Arizona DUI arrests, as a percentage of traffic stops, were down over the Fourth of July weekend.

So apparently Arizonans, if they’re still drinking, are doing it outside of the driver’s seat. 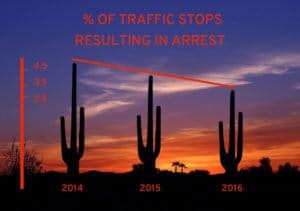 There’s no mistaking the stats from Arizona Governor’s Office of Highway Safety. Sometimes arrests are down because budget cuts reduce the number of patrols or sobriety checkpoints during a given year. But the number of Arizona police stops has been climbing for 3 years, even as the number of arrests has been dropping. 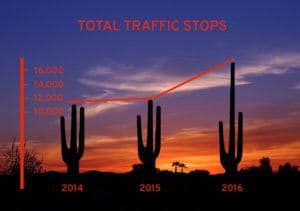 This isn’t the first time such a drop was noted. Last year GOHS reported that Labor Day weekend arrests were down 20 percent. If this trend continues, Arizona is in danger of becoming a safe place to drive, at least on holidays.

The big question: why?

The big answer: no one can say for sure.

Certainly Arizona has been serious about taking drunk drivers off the road for a long time. The state was among the first to adopt an all-offender ignition interlock law, which is known to reduce DUI recidivism.

But there’s more too it. We can conclude that, if more cars are being stopped and fewer drivers are impaired, then more drivers are choosing to drive sober. That means that Arizona drivers in general are getting the sober driving message.

Where did they get it? Arizona doesn’t put out a torrent of public service ads, as, say, Texas does. It does regularly bring out its “Drive Hammered, Get Nailed” DUI enforcement campaign, which essentially lets people know that the police are out there arresting people – not exactly an artsy approach. But in the age of the Internet, anyone can see any drunk driving PSA. But there’s no proof that ads alone can cause a dramatic drop in drunk driving.

A more plausible answer is that Arizona get the message through traffic stops.  Sobriety checkpoints do more than just catch drunk drivers: they let everyone who passes see that the police are out enforcing Arizona DUI laws. And for every person stopped at a checkpoint and asked if he or she has had anything to drink tonight, thousands pass by and witness the process. Those people are much less likely to drink and drive.

Currently 38 states, including Arizona, conduct sobriety checkpoints. Twelve states have constitutions that forbid them, and they will probably remain controversial. And there might come a time when the message has been so well received that no checkpoints are necessary. Until that time, we can be grateful that fewer drunk drivers are on Arizona’s roads.