Today is Blackout Wednesday: Beware On The Roads! 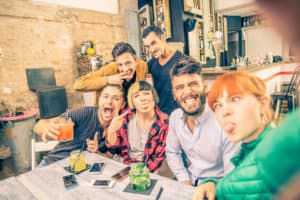 It’s a strange little holiday. It commemorates nothing. There’s no mention of it in the news, and no stores have sales in its honor. No one ever wishes anyone happy returns of this particular day.

Yet a great deal of alcohol gets drunk – and a great deal of people get drunk – on this day of the year, apparently. That’s why it’s called Blackout Wednesday, the eve of Thanksgiving.

A few reasons contribute to the unusual status of the fourth Wednesday in November. Families reunite during this holiday. College students in particular are home from far away, and they’re eager to get together with old friends they haven’t seen in a while. They’ll probably be spending Thanksgiving with their families, so Wednesday night is their chance to hang out and drink with their own age group.

Another reason that the alcohol flows freely on this night is that a lot of people can look forward to a full day of cooking and entertaining on Thursday. So they’re not inclined to chop turnips for an extra meal the day before. So they go out. That means a restaurant, relaxation, and drinking.

The Danger of Blackout Wednesday

Since so many Wednesday revelers are not celebrating at home – they’re enjoying a night out with the friends they won’t see on Thursday, which is a day reserved for family – they’ll have to find their way home at the end of the night. Most, we hope, will take public transportation, or will use a designated driver, either paid or unpaid.

But Blackout Wednesday has its drunk drivers – police know it’s a prime day for picking up DUI arrests. So be careful out there. If you’re driving, be extra vigilant. And of course, if you’re drinking, have a plan, so you don’t end up with a fine, jail time, and an ignition interlock.

Previous Post:Arizona, A DUI Law Trailblazer, Says No to Legal Pot.
Next Post:He Drove Home Many Safely. Then a Drunk Driver Took His Life.