An Arizona County Tries a New Model for DUI Enforcement 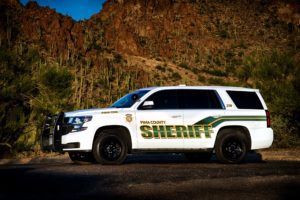 Like many areas of the country, Pima County, in south central Arizona, is struggling with a drunk driving problem. But, like the state as a whole, it is determined and resourceful in its anti-DUI efforts. These efforts include strengthening – and decentralizing – DUI patrols.

Up to now the Pima Sheriff’s Department ran its DUI units from the main headquarters in Tucson. The new, decentralized approach allows the patrols to target specific problem areas.

Traffic enforcement units will be freer to focus on speeding and school zone safety, and will be a noticeable deterrent to impaired drivers.

The most effective way of combating the drunk driving problem is to persuade people that it’s a bad idea. Second to that, it makes sense to persuade drivers that they can’t get away with it. Pima County has just upped its game on this second, very vital method.

Previous Post: « Just Who Are Those Drunk Drivers Among Us?
Next Post: 5 Ways Drivers Violate Their Arizona Ignition Interlock Requirement »