Can You Engineer Out Drunk Driving? 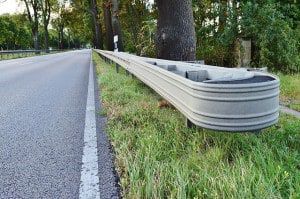 A fatal crash in Raleigh has raised a question about public safety: if a location is particularly treacherous for drunk drivers, is the government obliged to erect safeguards?

Tough call. On the one hand, the government is responsible for making roads and streets safe. On the other hand, drivers should not be drinking, and one could argue that taxpayer money should not be spent to accommodate the actions of those who break the law.

The problem centers on a home at the junction of North New Hope Road and Fawn Glen Drive. Recently a car left the road and hit the house, killing the driver.

The same house was hit on four previous occasions between 2007 and 2014. The city installed reflectors on the road to help drivers see the curve, but that does not seem to have done the trick. The homeowner, Carlo Bernarte, wants the city to build a guardrail to deflect drunk drivers from his property.

The city’s position is that you cannot make drunk driving go away through engineering. If people obeyed the laws, a guardrail would not be necessary. They have also stated that rules and safety issues preclude a guardrail in that place.

So, what do you do when a law, one with stiff penalties, continues to be flouted? Do you protect people from the consequences anyway? That’s certainly what ignition interlocks do. The devices prevent a vehicle from starting if the driver has been drinking. North Carolina mandates them for certain DWI offenses, particularly repeat offenses and high BAC (blood alcohol concentration) offenses.

Ignition interlocks are used because some people cannot be counted on to make the decision not to drink and drive. While other measures are needed to help repeat offenders, the interlock device is there to protect the public.

So you can, to a degree, “engineer out” drunk driving. Interlocks provide a guard rail that protects every driver, passenger and pedestrian on the road from drunk drivers.

Engineering isn’t a solution to everything, but ignition interlocks have brought down the alcohol-related fatality rates wherever they are used. If more drivers had them in North Carolina, a certain house on Fawn Glen Drive might  be a little safer to live in.