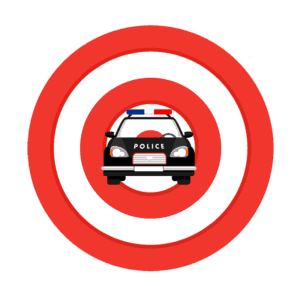 With over 2 million vehicles registered in Arizona, the chance that a drunk driver in one car will collide with another vehicle are pretty good.

But what are the chances that a drunk driver would hit a patrol car – there are not that many of those, comparatively speaking. Nevertheless, it happens more often than you’d think in every state, including Arizona.

Phoenix’s most recent incident happened near 26th Avenue and Bethany Home Road, where an intoxicated man rear-ended a police vehicle.

Fortunately, no one was seriously hurt. But one of the officers was standing beside the vehicle at the time of impact. Had the drunk driver veered a bit, it could have been disastrous. The charges were DUI and endangerment.

A drunk-driving crash into a police car is unique only in that the victim is able to give a sobriety test and make an arrest. Otherwise, it’s just another one of Arizona’s 5,000 alcohol-related crashes each year, in which some 300 people die.

That number is one the state has been struggling with for years, with some success. In 2007 Arizona became one of the first states to pass a law mandating an ignition interlock for all DUI offenders. An ignition interlock, or car breathalyzer, prevents a vehicle from starting if the driver has been drinking.

The ignition interlock law has saved lives, and other actions – DUI patrols, sobriety checkpoints, laws prohibiting the refusal of a sobriety test, for example – have also helped bring down the number of lives lost due to impaired driving.

Yet drunk drivers ply Arizona’s roads every day, and while they’re not likely to plow into a police car necessarily, they’re very liable to hit someone, and that someone might be you. Be safe out there. Don’t let friends drive drunk, and if you’ve been drinking, get a sober ride. If you hit a cop car, you’re not talking your way out of it – guaranteed.