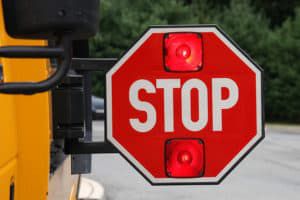 It’s a parent’s nightmare: a school bus driver has been drinking. It happened in Cherokee County, North Carolina recently. Fortunately, no one was hurt when the school bus got stuck at an intersection. The driver was spotted, tested, and arrested after he failed a sobriety test.

Seven children were aboard.

There is a special kind of alarm that arises when one learns that the lives of children have been put in danger. Whatever reactions can be expected from parents, teachers, and officials, you can be sure that “No harm, no foul” will not be among them after a school bus DUI.

So what is to be done?

According to news reports school leaders will be looking into procedures such as random testing to make sure this doesn’t happen again.

How Europe uses Ignition Interlocks to For Safer Roads

A few countries in Europe have decided that drunk driving is too big a risk to tolerate. France ordered all its school buses to have ignition interlocks by 2015. An ignition interlock, or car breathalyzer, prevents a vehicle from starting if the driver has been drinking.

With an ignition interlock, a driver gives a breath sample before starting the vehicle. If the driver’s blood alcohol concentration is above a preset limit the vehicle cannot start. The driver then has to blow tests periodically while driving. This is a safe procedure that does not require the driver to take his or her eyes off the road.

Sweden was an innovator in using ignition interlocks for commercial vehicles. Trucks, government vehicles, company fleet cars and even trains employ ignition interlocks so that the public can be protected from drunk drivers. The devices are even offered as dealer options.

Random testing is helpful, but ultimately it is random, and won’t catch every instance of alcohol use. Perhaps it’s time for states to consider the lifesaving powers of technology. Having ignition interlocks on our school buses would give parents a bit of peace of mind in an uncertain world.

Last Year Phoenix Had 300 Halloween DUIs. Here’s A Scary Thought: Drive Sober This Year.
Next Post: 9 Explanations You Can Give for Having an Ignition Interlock in your Car »