A Scottsdale Crash Reveals the Nature of Extreme DUI 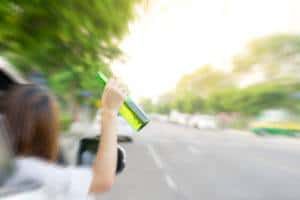 In fixing drunk driving charges, most states make a distinction between run-of-the mill intoxicated and extremely drunk. The principle is that it’s worse to drive if the alcohol level is high enough to make a driver unable to control his or her vehicle at all.

Some states use “drunk” and “super drunk.” Arizona, however, has three levels of inebriation that its courts recognize:

Recently a woman was arrested for killing a motorcyclist while speeding at more than 80 miles per hour, and being drunk at the time. Her blood alcohol level was .355, more than four times the legal limit, and more than twice the Extreme DUI level.

At that level, a person is unable to walk unassisted. They are disoriented, depressed, and usually racked with nausea. Blackouts are common – at this level alcohol poisoning is very possible.

Yet it might be possible to step on the gas and reach 100 miles per hour, as the offender did.

A super extreme DUI is fairly rare, only because most people with that much alcohol in them are not coordinated enough to drive. But when a person can get on the road with a BAC that high, the results will almost certainly be disastrous, as they were in this case.

And though the crime is not common, it makes sense for Arizona to employ the distinction, so that those who do drink such staggering amounts and drive face consequences that are more severe. Extreme DUI is truly drunk driving on a different and more lethal level.

Previous Post: « Scottsdale Gets $150K to Teach Residents Just How Drunk They Are
Next Post: Your Halloween Party Superhero Disguise: Designated Driver »