Tomorrow, Talk to your Kids and Teens About Alcohol 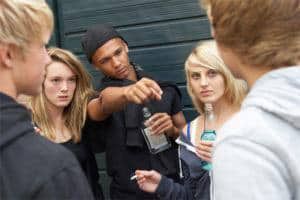 Life isn’t always fair for kids. They have to contend with things they don’t understand, things which can harm them. And one of the greatest dangers they face is alcohol.

Alcohol, which is not meant for kids and is especially dangerous for them, is easily available and relatively cheap. Children learn from the example of their parents but also older kids, and drinking can be seen as an important rite of passage. Teens especially can undergo peer pressure which leads to binge drinking and drunk driving.

In order to help deal with this problem, Mothers Against Drunk Driving (MADD) has designated April 21st the National Day to talk to your kids and teens about alcohol.

As kids get into middle school, parents face the problem of diminishing influence. Children who once considered their parents their most important influence are now more worried about being cool, gaining prestige with their peers, and getting into cliques. Sometimes alcohol is the test of who is “in” and who is “out.”

To make the talk easier, MADD has prepared a guide, “Talking to Kids and Teens About Alcohol.” You can download the guide and use the language in it to help frame the discussion with your own kids. The guide urges parents to adopt certain strategies with their kids:

It takes more than one talk to keep a child or teen on the right path. Your work will not be over after tomorrow. But perhaps starting the conversation will help you and your child understand each other better.

Parents often assume that their child is too young to be interested in drinking, or that he or she is the “good kid” who just isn’t interested in alcohol. Statistics tell a different story: a kid can be intelligent and well-behaved and still take foolish risks.

On the other end of the spectrum, some parents despair that their kids won’t ever listen to them. As the guide points out, parents have more influence than they think. Which is why you should download the guide and learn how to deal with the possibilities.

Tomorrow’s the day. Set aside some time to talk to your kids about alcohol – it might make a difference that will last their whole lives.

Previous Post:Drunk Driving: Does the .08 Legal Limit – or Any Blood Alcohol Limit – Make Sense?
Next Post:Don’t Blame Me for Driving Drunk – I Was Drunk at the Time!