Two Wrong-Way Drivers in One Night, on One Phoenix Road. 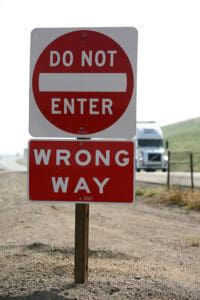 We’ve said it before, and we’ll say it again. Wrong-way drivers are one of the most lethal results of drunk driving.

It’s just a wrong turn or a sign ignored, but in seconds you will see cars scatter and swerve. You’ll hear horns blare and too often then the crunch of metal on metal. It’s something drivers are never prepared for, and every year wrong-way drivers, usually drunk, take lives and cause injury.

On a Wednesday morning two such drivers were reported on the same road: SR-51 in Phoenix. One made about 10 miles before crashing into the police car that was in pursuit. The second one managed to be arrested before a crash could occur.

Is There a Drunk Driver on Your Road Now? Probably.

Two wrong-ways within the same hour? What are the chances? In fact, all too good. In one estimate, one in 12 drivers on the road after 11 pm is impaired. If there were, say, 50,000 cars driving on that given morning, during the 11-to-5 period, then some 4,100 drivers would be under the influence. That’s too many for any patrol to suss out. It’s not surprising that on one night two drivers had enough to leave behind their coordination entirely.

The scary conclusion is that impaired drivers are startlingly common. That’s why it’s vital to take precautions to ensure that those who are caught don’t reoffend. Ignition interlocks, alcohol treatment programs and sobriety courts are proven methods of taking DUIs off the roads and shifting the odds in favor of the sober driver’s getting home in one piece.