Mothers Against Drunk Driving (MADD) is known primarily for its advocacy of the cause of sober driving. It also aids and counsels drunk driving victims and their families. And the organization has a third function: to honor those who have made the roads safer across the country. Last month MADD took the opportunity to hail the heroes of North Carolina at its annual Awards of Excellence Banquet.

Held at Prestonwood Country Club in Cary NC, the banquet placed the spotlight on law enforcement personnel and mission partners who have worked toward the vision they share: a nation where no one drives drunk or drugged. 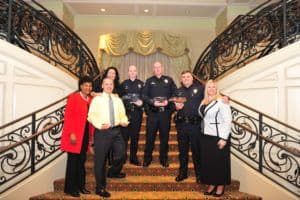 North Carolina has made progress in the fight against drunk driving, and these and other people – some honored by MADD, some yet to be recognized – have worked hard to keep impaired drivers off the road. There is more to be done. For instance, North Carolina has not yet passed a law mandating ignition interlocks for all DWI offenders, as 25 other states have. Ignition interlocks have been a priority for MADD for a long time.

For that and other vital legislation in North Carolina, MADD is on the job. And when police, legislators and road safety advocates excel in the business of making life safer for motorists and pedestrians, MADD will be there to honor them.

Previous Post:Unintended Consequences: A DWI Can Leave You Homeless
Next Post:The Device that Stopped NC Drunk Drivers More Than 129,000 Times